The Woman who Used Data to Revolutionise Healthcare

If there is a recurring theme along the life of Florence Nightingale, it is that she never did what people expected of her. She was born into an intellectual family that made sure she got a good education. She had a knack for learning, and displayed talent and interest as she studied Classics, Philosophy, Politics and the Bible. Her father loved Mathematics, and introduced her to it, despite believing that it was not for women. Even so, she became fascinated, and after many arguments with her parents, begging to be allowed to study Maths instead of “worsted work and practising quadrilles”, she was finally allowed to begin a proper education in the subject, being tutored by distinguished Mathematicians such as James Joseph Sylvester. [1] 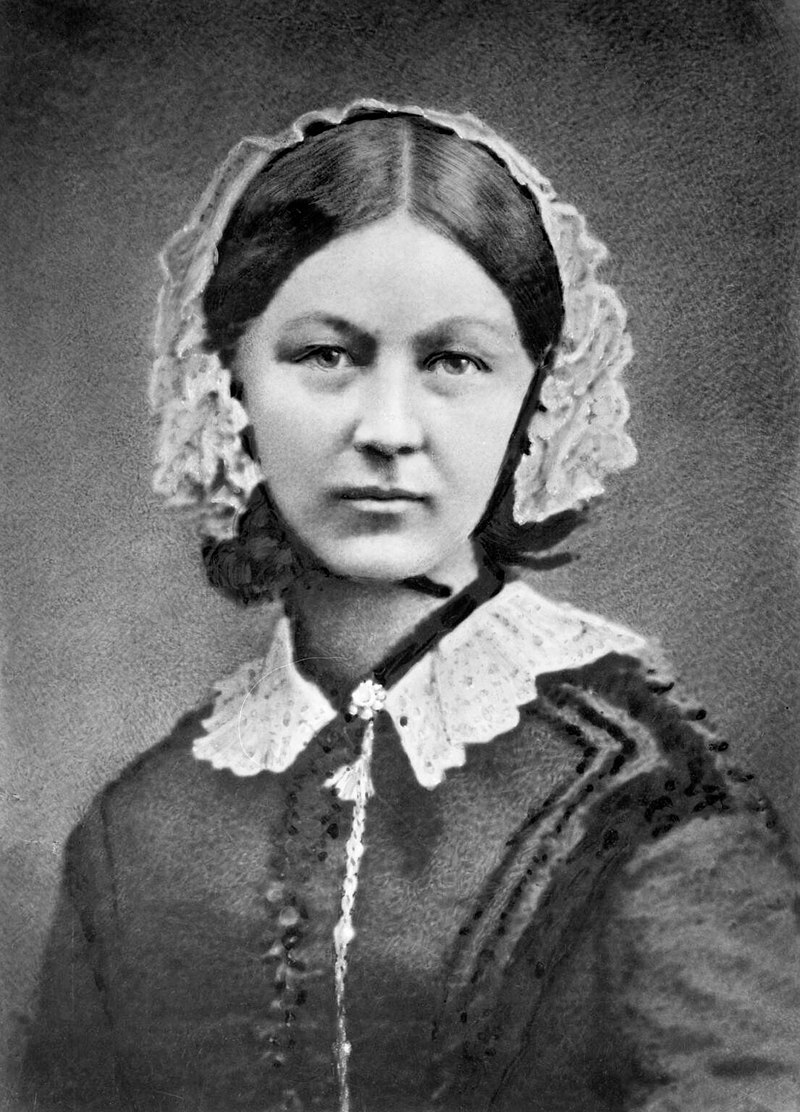 Florence Nightingale would soon face off with her parents again — she felt that her calling was to devote her life to the service of others, and as such wanted to become a nurse. This too was supposedly not for her: nursing was for women from the lower classes, and being from an upper class family, this was not permitted. Nonetheless, she educated herself around nursing in what ways she could, as well as collecting data on hospitals and health in general. [1]

She would later go on a tour of Europe and Egypt with family friends. There, she trained as a nurse in different hospitals in a few countries, before coming back to London. There, she became an unpaid superintendent at a hospital — but she did not stay in this position for long. [1]

In 1854, the Crimean war was underway. The British were succeeding in military terms, but the wounded soldiers were facing appalling conditions. The Times criticised the army’s medical facilities, and so the British Secretary for War, a friend of Nightingale’s, asked her to go and improve the situation. She went as the leader of a group of volunteers, 38 nurses and 15 nuns, and left for Turkey.

When she got there, she had her work cut out for her. She set about improving the nursing practices, by introducing things as simple as handwashing. She went about improving the conditions in any way she could, writing back to Britain to describe the problems at the hospital and request further help. Isambard Kingdom Brunel even designed the first prefabricated hospital, which was shipped to Turkey, at which the mortality rate was a tenth of the original hospital. Overall, she succeeded in lowering the death rate among wounded soldiers from 42% to 2%. [2]

Despite saving so many lives, Nightingale knew there was much more to be done. Nursing in the army was in general need of reform. When she came home she discovered that even in peacetime, soldiers were two times more likely to die from preventable disease than civilians were. Poor hygiene in hospitals was killing as many soldiers as actual conflict, but she would need to gather evidence and present it to the right people if this was going to change.

The kind of reform she was seeking was not going to be easy. The strict hierarchy of the army, her being a woman, and the fear of scandal and lowering troop morale would all mean that she would have to make a very strong case if anyone was going to pay any attention to her.

This is where her mathematical mind became so valuable. During the war, she hadn’t just improved healthcare practices — she had improved record keeping as well. She’d collected statistics on soldiers killed, injured and diseased, and even went as far as to employ a team of data gatherers to collect as many figures as possible. [3]

In London, she spent months studying this data — both the data she’d collected, and the lower quality data that had been collected before she arrived, obtaining final figures that were as accurate as possible. She then sought the help of William Farr, who provided similar datasets for mortality among civilians, with which she could compare her data.[4]

These statistics had some success with the government: she published a publicly available report, as well as writing a private report for the government. The public report got some attention from the press, and Nightingale hoped this would be enough to trigger reform; unfortunately however, the Prime Minister resigned and the resulting change of administration killed any progress this might have made. Meanwhile, her private report was facing anonymous criticism, attributed to senior medical officials. Nightingale would have to change her strategy if she would still achieve reform.[4]

She began to leak her private report to influential figures, including the author Harriet Martineau. Together, these two women agreed that Martineau would write a book revealing Nightingale’s findings — perhaps most importantly, it featured the famous Polar Area Diagram. This was, at the time, an innovative new way to present data to people without a statistical background, and as such it communicated to the public just how serious the problem of poor hygiene in military hospitals was.[2] 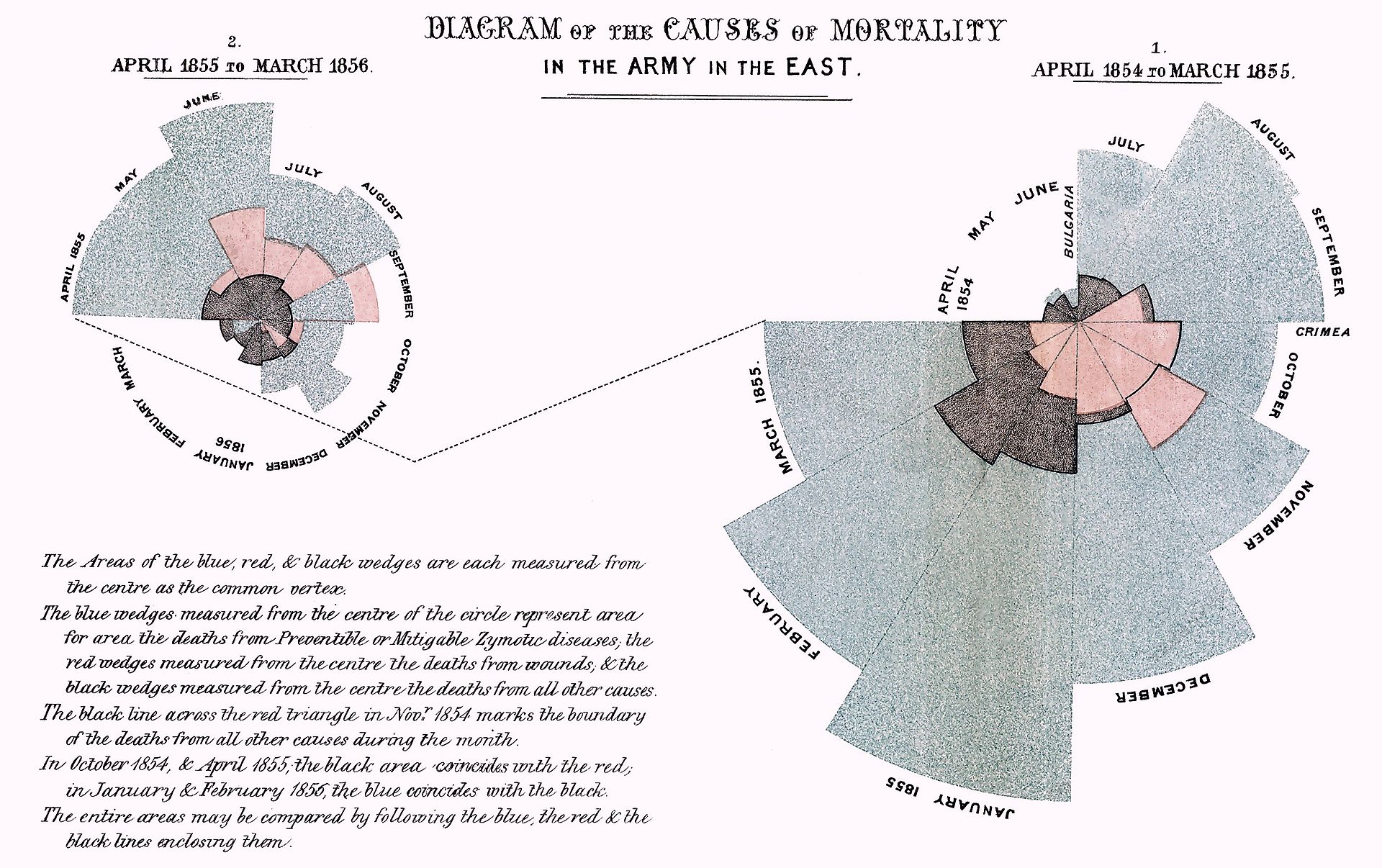 This book, titled England and Her Soldiers, achieved success in Britain and abroad. Martineau wrote to Nightingale:

“Our book, England and her Soldiers, is at present quoted largely and incessantly in American medical journals, as a guide in the newness of military management in the Northern states […] the medical journals are learning from us; and I am sure you will be glad to hear it.”[4]

This book came as one important part of a wider campaign to reform nursing around the world. The reform did gradually come about, and Nightingale’s work was undoubtedly a major part of this. Nightingale’s work also set a trend of presenting statistics to the public in an understandable way, and she even became the first female member of the Royal Statistical Society.

Nightingale’s work is an excellent example of how to argue with statistics. The issue she wanted to fix was serious and systemic, and the solution was straightforward, if the right people were willing to implement it. Her problem was always demonstrating that the issue was worthy of people’s attention, and she did this masterfully by identifying the best figures to collect — the different causes of death, before and after each improvement was made, and respective figures for public mortality. Once these crucial figures were obtained, she could form an argument that was impossible to ignore.

If you find yourself trying to present an argument in a similar way, I would invite you to think about the kind of statistics you might need. The right figures are incredibly powerful, and if you think the right figures don’t exist, I would urge you to think again. Artificial Intelligence is only now making it possible to extract data in ways that didn’t exist in Florence Nightingale’s time. If your message would benefit from figures that you don’t have yet, get in touch today.